Riley and I left City of Rocks State Park on Nov. 1st and headed to Rockhound State Park, outside of Deming.  It’s set among the Florida Mountains, and there are some really interesting rocks to be found.  There are areas of ash and lava deposits where people have found geodes and ‘thundereggs’, which are like geodes, but with a solid center.  You can take up to 15 pounds of rocks per person.  There are also quartz, jasper and other common, but pretty rocks.

We got settled into a site at the top of the hill, right under the mountain.  The TV towers of the local channels are all there, the highest point in the area.  So I got GREAT reception on my little rabbit-ear type antenna.  On Saturday I got to watch UT play (and win) against Texas Tech.  On Sunday was a full NFL day! 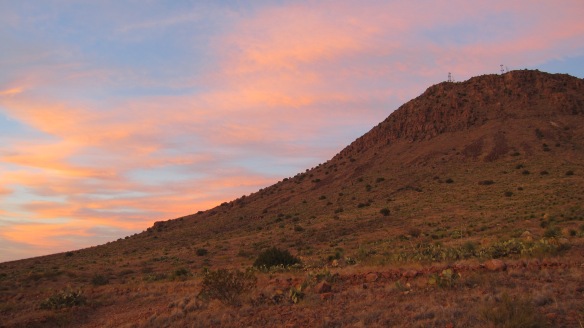 Riley and I also hiked the trail that runs above the campground, partway up the mountain.  On Monday, I did some rockhounding, leaving Riley in the RV and climbing most of the way up the mountain to see if I could find any thundereggs or geodes.  I think  I found a couple of small ones, but haven’t broken them open yet. 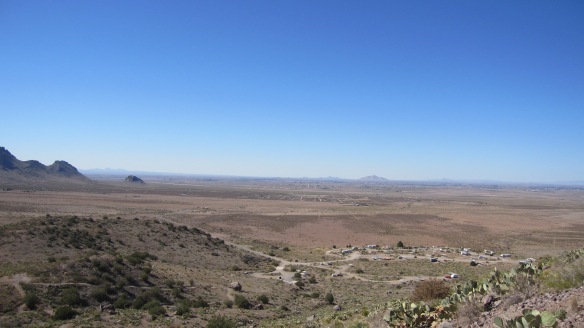 View from high on the mountain above Rockhound

I really liked Rockhound.  Being so high up it gets a good breeze during the day and the views/sunsets are great.  But, I had more I wanted to see before getting back to TX by Thanksgiving.  So we were off on Tuesday, the 6th.  I was heading next to Guadalupe Mountains National Park, but stopped in Las Cruces for an overnight.  I wanted to watch the election results and do laundry.  Stayed at Sunny Acres RV Park, which is an Escapees affiliated park with a 50% discount (usually the Escapee parks have 15% discounts).  It was a good park with a clean laundry room.  The next morning I hit the Las Cruces Farmer’s Market, Tandy in El Paso for bookbinding leather, and got to Guadalupe Mountain just before dark.  The campground is just a parking lot with site numbers marked, but at least it was right in the park.  Riley and I hiked the one trail that allows dogs.

Along the hiking trail.  Can you see the deer in the brush? Almost dead center of the picture. 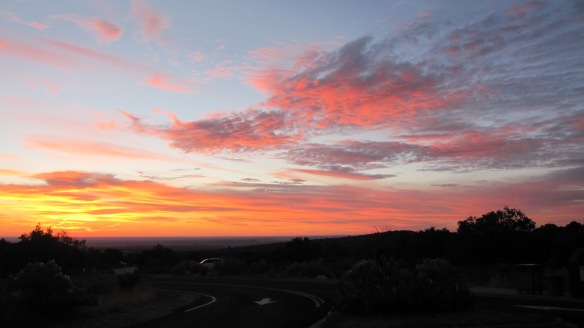 The next day we went to Carlsbad, NM.  I thought about going to the caverns. I had been there as a kid, but supposedly they have made some upgrades to the lighting and may be worth going again.  It was too hot to leave Riley in the RV and I didn’t want to kennel him, so passed.  Besides, the bats had all gone to Mexico for the winter, so no evening flight program.  I stopped at the Walmart and then went a few miles up the road to Brantley Lake State Park.  The lake is really low, like pretty much all the lakes at the parks we visited.  It was a decent park. I bet it would be great when the lake is up closer to the sites.  It had no Verizon coverage and no park wi-fi.  That’s OK for a day or two, but by the third day I was ready to seek greener pastures. Chris had moved to Bottomless Lakes State Park near Roswell, which had no Verizon, but did have wi-fi in the park.  It wasn’t far, so I decided to check out that park.  The lakes are a series of sinkholes, and the campground is by a nice, big lake with a beach.  I found a site in the area with electric/water hookups, but there are nice no-hookup sites across the lake that are along the water’s edge.  Generally the best sites at the NM parks have no hookups.

Chris was in an area nearby with no hookups (where the 2 trucks are in the picture above), but it was about to get super cold so she moved to a electric site further up the hill to be able to run her electric heater.  I moved from a site further over to the one above, where I could have a view of the lake and was closer to the wi-fi antenna.  Again, we hiked, walked dogs together, and I picked her brain about full-timing in an RV.

On Friday the 16th, I left to head back to my folks place northwest of Austin for the holidays.  We made it to San Angelo that night and just stayed at the Walmart.  On Saturday I planned to get in by about noon.  We stopped in Brady for a break and dog walk, but when I tried to start the engine up it was dead.  Oh, no.  Luckily I had signed up for Coachnet service and they got a local auto repair shop over to me right away.  Keith from K&T Automotive got me charged up enough to follow him to his shop down the road.  While there he diagnosed that a wire from the alternator to the battery had blown and I wasn’t getting a charge.  He fixed me up and for $70 I was on my way.  Funny – I did about 6,000 miles on the trip, but couldn’t make it the final 70!  Oh well, at least it was easily and quickly fixable.  I think I made it home by 3:00 or so.

In for repairs in Brady, TX

It was a great trip.  So great that I decided to do another trip for 2013, starting in Quartzsite in January.  Then, when the weather warms will go into California where I will (hopefully) visit Yosemite, Sequoias, and the Redwoods.  Also, will visit the Oregon coast and Crater Lake, Washington state, Seattle and Vancouver, and Glacier National Park.

Over the holidays I had a lot of stuff to do.  I will do one post about all that, then start up writing about the new trip.  Thanks to everyone that have been reading my travel log.  I hope you enjoyed the pictures, and got a tip or two of places to go on your own travels.