After Oliver Lee State Park, we headed northeast 200 miles to Santa Rosa Lake State Park.  I planned to stay the 14-day limit there.  But, there was almost no Verizon signal there.  My “Coverage” app, which gets their info from the carriers (Verizon, AT&T, etc.)  about signal coverage, showed good 3G, possible 4G, signal there.  Nope.  Occasionally I could get a 3G signal, but it would go away almost immediately.  Also, I couldn’t get much of a signal on my AT&T iPhone.  It’s hard to be without signal for more than 2-3 days.  Also, most of the sites are quite unlevel.  I did find one that was mostly level across from the rest rooms and stayed there.

The site we ended up in.

Anyway, we did stay there for 6 days, as I had arranged to get a General Delivery package from my folks.  Something had come that needed a signature, and I needed to get mail sent already.  Darn it!  I would have left within 2-3 days otherwise.  Plus, it was quite hot there.

So, we stayed and did a bit of hiking around.  I scooted in to town a few times, using my MiFi at the McDonald’s or at the Library.  On the way in to town the road goes past an auto transfer yard next to the railroad.  I had seen this on the Google Maps when researching the state park and town and thought it was weird.  Seemed like a lot of cars parked next to the railroad, with no businesses nearby.  When I got to Santa Rosa and passed by the site on the way to the park, it made sense.  The autos had window stickers on them.  They come there on trains, then get offloaded onto car carrier semi-trucks for delivery to dealerships.  There was always some activity going on – cars coming off and getting parked, or getting onto the semi’s.  I guess Santa Rosa is a central location with cheap land.  Anyway, I thought it was interesting. 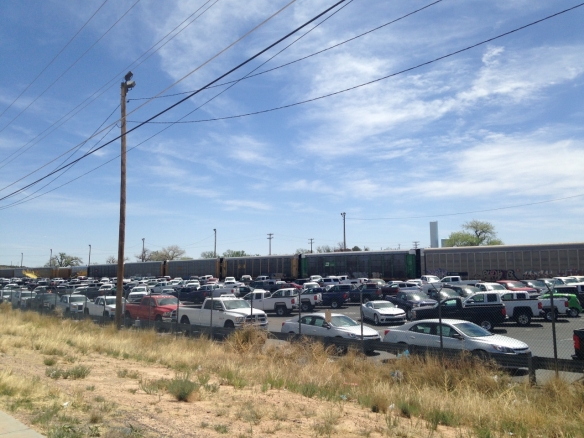 While at Santa Rosa Lake I wove a shawl for my friend, Margaret, who I had met at Grand Tetons National Park back in 2012.  I took a picture to show what it takes to “warp” the loom in a small space.  The fold-up table that I got to use between the couches and/or outside is placed in the aisle with a peg on the end to wrap the yarn around. 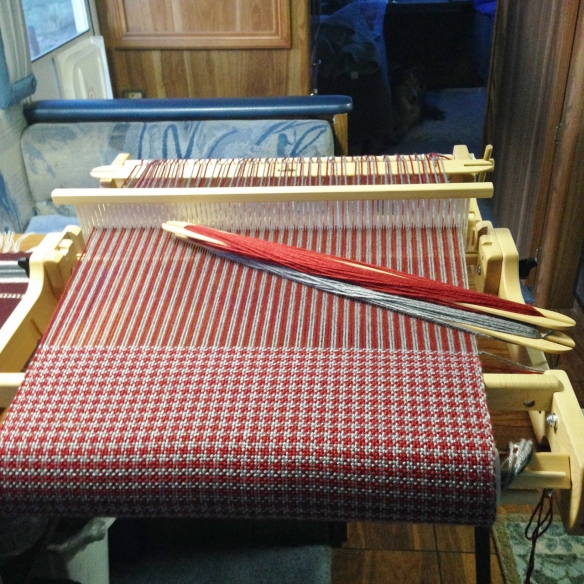 Then cut it off and finish the ends.  It seemed like it would be hard to weave in a small space, but it’s workable.  And enjoyable.

Finishing the ends with hand-twisted fringe

Other sights around Santa Rosa: 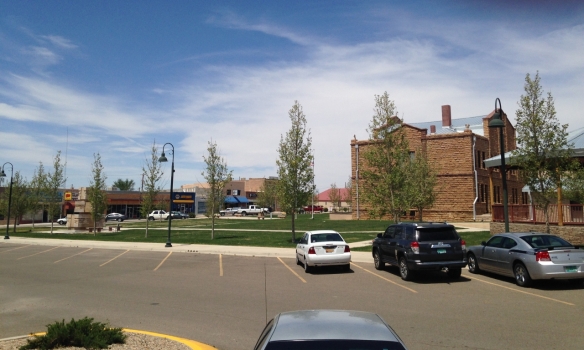 Next up, I will catch up on Storrie Lake State Park, where we are now.  Will try to get that posted in a day or 2.  Spoiler – I love, love Storrie Lake and Las Vegas, NM!  Four bars of 4G – yay!!  And ran into some blogging friends!

Friends I’ve met on the road

Traveling in LD with Sadie

The Good Luck Duck
Me and My Dog ...and My RV
Jimbo's Journeys