When I left off we were about to leave the Lake Isabella and Kern River area to head towards Yosemite National Park.  Prior to that I was camped with Chris in the wilderness of Mohave National Preserve near Goffs, CA and Lake Mohave near Bullhead City, AZ.  I had a great time but my plans were to head back to California and ease my way up to Yosemite as the weather warmed.  Last fall I had decided on a big trip this year:

I decided to do another trip for 2013, starting in Quartzsite in January.  Then, when the weather warms will go into California where I will (hopefully) visit Yosemite, Sequoias, and the Redwoods.  Also, will visit the Oregon coast and Crater Lake, Washington state, Seattle and Vancouver, and Glacier National Park.

But, I realized a couple of months ago that those plans were a bit too grand.  I would not be able to see all those things in one year.  At least I wouldn’t be able to do it properly.  So, I trimmed it back to Yosemite, San Francisco, and Redwoods in California in the spring, and the Oregon Coast, Portland and Crater Lake during the summer in Oregon.  After my visit with Chris at Mohave my solo travel at Isabella wasn’t as enjoyable.  And I realized that 4-5 months of travel through CA and OR wouldn’t be either if Chris wasn’t there.  So, I decided to just do the things that were reasonably close – Sequoia/Kings Canyon/Yosemite National Parks and San Francisco.  Then I would find a scenic route back to New Mexico by mid-June to meet Chris and then take off for a fun summer/fall of travel.  To paraphrase Billy Crystal at the end of When Harry Met Sally – When you realize you want to spend the rest of your road trip with someone, you want the rest of your road trip to start as soon as possible.  🙂

So, picking up where I left off, we left Lake Isabella on 4/25 and headed down the Kern River canyon to Bakersfield on Hwy 178.  That is one white-knuckle ride in an RV.  Very skinny road with twisty turns and steep grades.  Luckily there were plenty of pull-offs for me to let the faster cars go by.  I ran some errands in Bakersfield, then headed up Hwy 99 to Tulare.  I had a Passport America (50% off) RV park lined up just 30 miles up the road in Kingsburg, close to Sequoia/Kings Canyon NPs.  But, I was renting a car for the sightseeing and I needed to arrive by mid-morning to get the car and have all day for the drive.  So, Tulare was a good, close spot for the night that would let me do just a short hop to the RV park the next morning.  I had reserved a compact car, but they only had an Altima or a mini-van.  I was happy to take the Altima, as that’s the car I own back in TX.  It’s a comfortable ride. 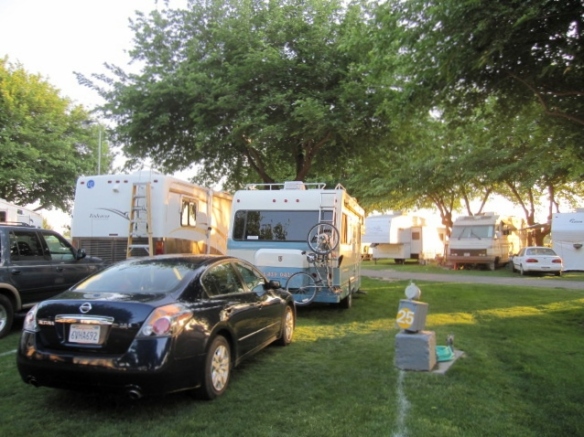 So, Enterprise picked me up at the RV park, I got the car, loaded up, and headed off through Visalia to Sequoia NP.  I had originally thought of driving the RV and camping in one of the campgrounds in the park.  But, part of the General’s Highway road that leads into the park has a 22 foot vehicle limit.  My motorhome is exactly 22 feet, but it sounded too close for comfort.  I looked at a bit of the road on Google Maps Street View and decided No Way!  Very skinny and twisty-turny.  I was very glad to drive it in in the rental car.  Also, the elevation gain from the Foothills visitor center to the main part of the park is 5,000 feet.  Not fun (to me) in a big, heavy motorhome.

Anyway, we headed out Hwy 198 to Visalia and through Three Rivers, where it starts getting very scenic.  As I was passing through Three Rivers I saw the Google Street View car parked next to the road near a cafe.  Normally I’m enough of a nerd to think that’s cool and want to go back and take a picture, but I had a limited amount of time already with too much to see and do.  So, I kept on, stopping at the Foothills Visitor Center.  I had heard there was a construction spot that only allowed cars through at the top of the hour and half past.  I got the general area of the stop from the Ranger and headed up the road.  I stopped to take a picture of Moro Rock.

Down in the valley next to the road was a creek and little tumbling waterfalls. During the snow melt, there are a lot of raging rivers and seasonal streams in the Sierras. 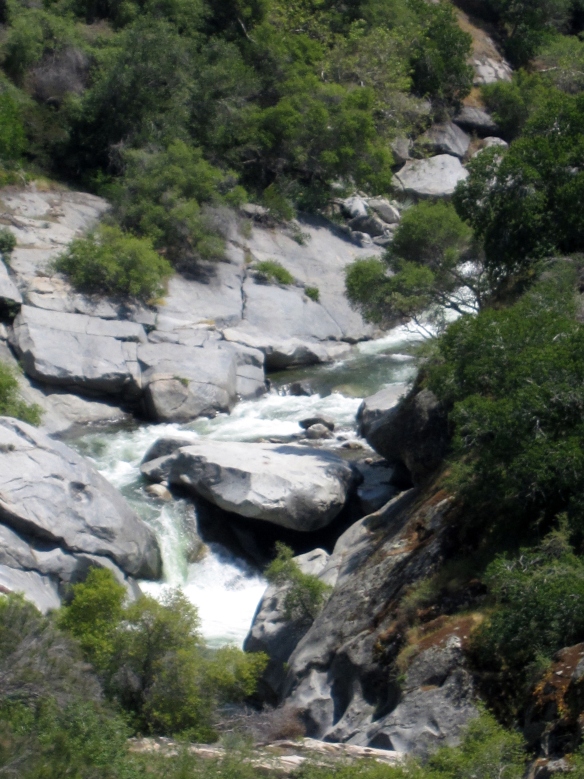 We stopped at a picnic area for lunch, then got back on the road, getting to the construction spot just as they were allowing the cars to go.  Great timing!  With my one day trip I didn’t have a half hour to lose sitting and waiting for the next passage.

The Giant Forest Museum was still closed for the winter season, so I just headed on to the General Sherman Tree.  It is the largest tree in the world by volume.  There are taller trees, and ones bigger around, but this one is both tall and wide.  It is one massive tree.

From the trail above the General Sherman tree.  It’s the tree in the center with the railing around it.

We stopped at the Lodgepole Visitor Center, then enjoyed the lovely drive on the Generals Highway to the Grant Grove in Kings Canyon National Park.

View of the Sierra-Nevada Wilderness peaks along the Generals Highway 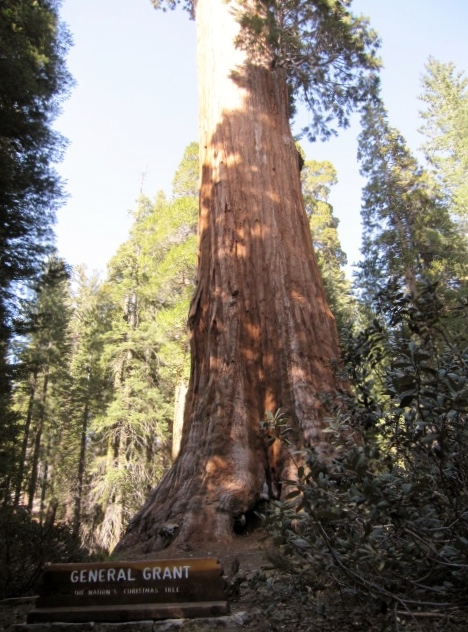 I thought this was cool:

Inside a Fallen Tree 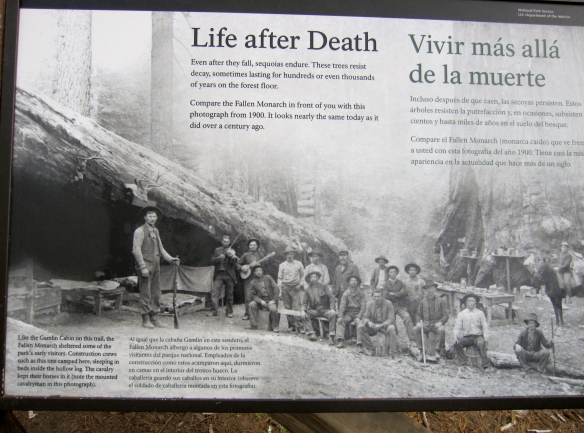 About the Fallen Tree

By this time it was 5:30 and I wanted to be back to Kingsburg before dark, so I had a bit of time left to drive part of the Kings Canyon Scenic Byway.  They had just opened the road for the season, so I was lucky to be able to drive it.  I got to Junction View (where the Middle Fork and South Fork of the Kings River are viewable) about the time I needed to turn around and head back home.

Junction View site.  River on the left, that’s the road on the right. 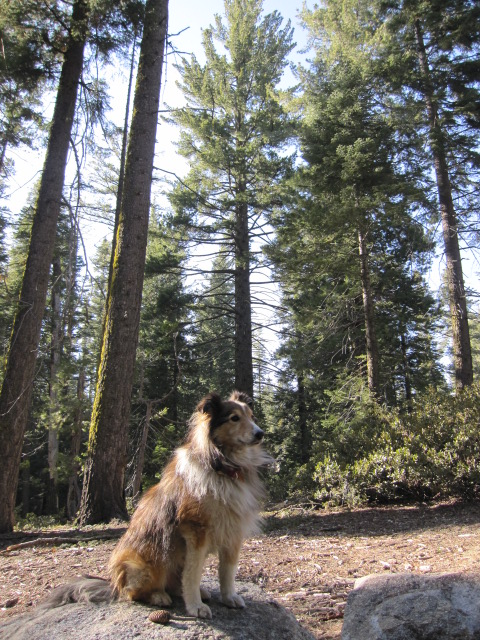 Yeah, I was there too. I wasn’t allowed on the trails or near the big trees, but I still like a good car ride.

On the way back we headed out Hwy 180, which goes toward Fresno and made a nice loop drive for us.  The parks could be traveled in an RV just from Hwy 180 in, to the Giant Forest Museum, and back to 180 to avoid the 22 foot vehicle limit on the south part of the park.  Hwy 180 is a much easier drive.  I decided I wanted to do the full loop and so got the car.  (Just FYI for anyone that plans to visit Sequoia and Kings Canyon.)

Next up was Yosemite.  I would spend Saturday night (4/27) at the Escapees RV park in Coarsegold. It’s just south of the park and would be a good overnight spot before my reservations for 4/28-30 in Yosemite.  I’m still going through all the pictures I took of Yosemite, but will post about that soon.

Friends I’ve met on the road

Traveling in LD with Sadie

The Good Luck Duck
Me and My Dog ...and My RV
Jimbo's Journeys